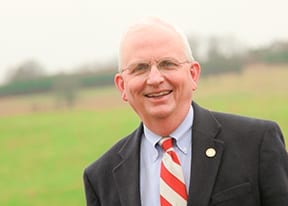 JEKYLL ISLAND, GA – Gary Black, Georgia’s Agriculture Commissioner who received more votes than any candidate for U.S. Senate or Governor in 2018 and 2014, today launched his campaign for the U.S. Senate seat currently held by Raphael Warnock.

“Warnock and Biden promised to ‘fundamentally change America,’” Black said. “They’re five months into it and job growth and opportunity are down, inflation, debt and gas prices are up, the Middle East is back at war. Satisfied? Or sickened? I fundamentally object. I’ll stand in the gap and say the wave comes this far, and no further.”

A longtime champion of agribusiness — Georgia’s largest economic driver — Black has made the “Georgia Grown” brand one of the most successful marketing efforts of its kind in the nation.

Black was a founding member of President Trump’s rural and agriculture advisory group started in June of 2016. He also hosted President Trump in a visit with Georgia farmers hit hard by Hurricane Michael and worked with the administration to utilize China tariff money on expanded marketing efforts in Taiwan. He was a vocal backer of Congressman Doug Collins’ Senate campaign last year.

He received more votes than any candidate for U.S. Senate or Governor of either party in Georgia in 2018 and 2014.

Gary grew up on his family’s beef cattle farm in Commerce, GA where he and his wife Lydia also raised their children, Ward and Caroline. He is a University of Georgia graduate, and a past president of the college’s alumni society.

Gary Black is a Leadership Georgia Pattillo Award recipient and the 2017 Georgia Trend Magazine Georgian of the Year. He currently serves on advisory committees for the United States Department of Agriculture, Environmental Protection Agency and the Export Import Bank of the United States.

Gary and Lydia continue to raise commercial beef cattle at Harmony Grove Farms, and serve together in various ministries at Maysville Baptist Church.