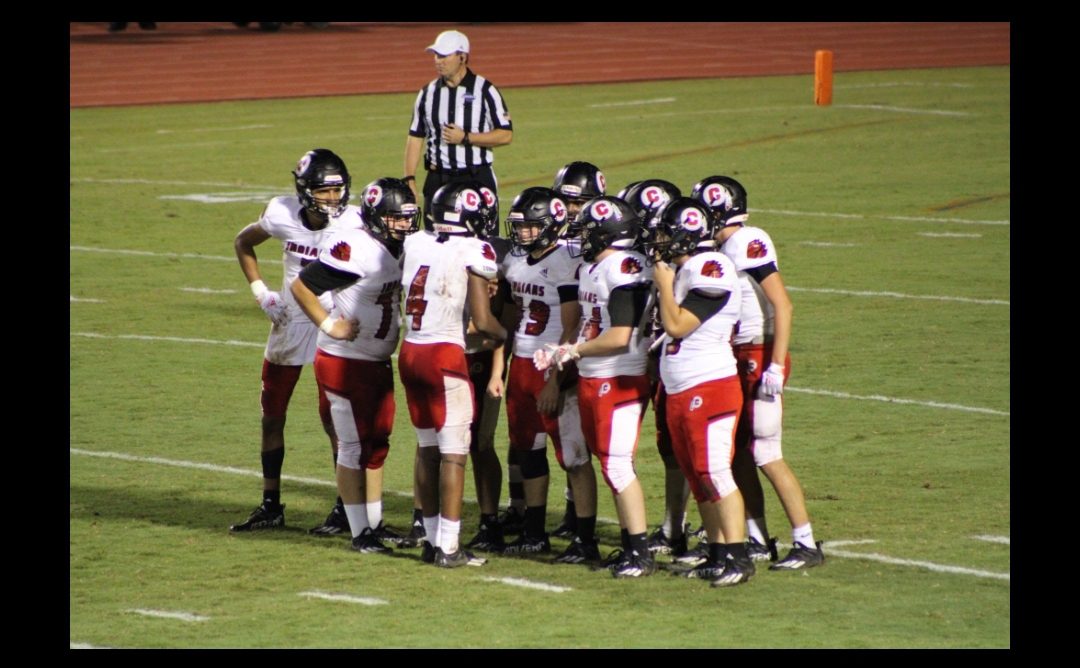 The last few weeks for the Chattooga Indians Football team have been tough to say the least. On August 25th news broke that the Indians were to cancel their week two game at Pickens County due to Covid -19 Protocols. Just one week later the next game vs Sonoraville was also Cancelled. After only a few weeks of preparation and one game played the Indians were unable to practice for two weeks straight. The Quarantine was lifted and the Indians began practicing for Northwest Whitfield on September 6th.

The Region 7-AA Chattooga Indians 0-2 Traveled to Tunnel Hill to face off against the Region 7-AAAA Northwest Whitfield Bruins 2-2. Early on in the action both defenses were bend but don’t break allowing yards in between the twenties but not allowing any points to be put on the scoreboard.

With just a little under four minutes left in the first quarter Northwest Whitfield Senior Receiver #1 Ray Morrison took a tunnel screen from Junior Qb # 15 Owen Booker 51 Yards to the EndZone. The PAT was Successful by # 14 Grant Holder. That Brought the score to 7-0 Northwest late in the first. The Next Drive for the Indians end up in a quick three and out followed by a #4 Nick Hester Punt. The Ensuing Bruins drive started on their own twenty yard line. Just a few plays later Northwest was in the Chattooga redzone and the buzzer for the end of the first quarter had sounded.

To start the second quarter the Bruins started backing up thanks to a few penalties and a timely fourth down sack by Chattooga’s #34 Zander Cook. At the seven minute mark in the second qtr the Bruins get a stop of their own and force a Chattooga punt. Northwest would take over on their own 5 yard line after another good punt by #4 Nick Hester. Only a few plays later Chattooga would face 30 yards in penalties with an unsportsmanlike conduct and a personal foul call that moved the ball all the way to the Chattooga 14 yard line. The very next play was a 14 yard Touchdown pass from #15 Owen Booker to #2 Hudson Grey. PAT was no good making the score 13-7 Northwest.

Just before halftime Chattooga’s #4 Nick Hester hit #2 Jaylon Johnson on a halfback pass for a 36 Yard Touchdown. PAT was good by #89 Caroline Hodges. That would prove to be the only score of the night for the Indians. The Bruins would tack on two more scores on the night one by #6 Adrian Reyas in the 3rd quarter. In the 4th quarter the Bruins would seal the game with the final score of the night by Northwest Qb #15 Owen Booker on a 42 Yard Scamper.

Chattooga Falls to 0-2 and will Travel to Heritage (Newnan) next week while Northwest Whitfield moves to 2-2 and will have two weeks off before taking on the Central(Carrollton) Lions on October 1st.