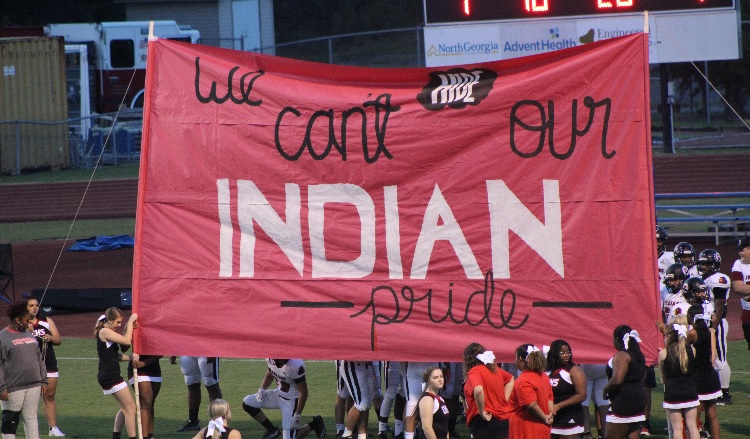 The 2021 football season did not end as many in the town of Summerville Georgia wished it would have. That does not mean that the season was not a success. The Indians went (5-5) overall 4-2 in region play and finished as the number 4 seed in Region 7-AA. Chattooga traveled to Haralson County in the first round of the GHSA State Playoffs and were defeated by the Rebels. That appearance made it the 8th Straight playoff appearance in a row for the Indians. That Stat alone signals a very good run and speaks to the overall consistency of the program. Also that is a Chattooga record for most playoff appearances in a row.

As the 2022 season nears and the goal of making the playoffs remains the same. That is about the only thing that doesn’t change. The Indians say farewell to a graduation class that helped carry the team to much success in the previous seasons. They will look to a new cast of playmakers to fill the void left by graduation.

After the Reclassification of Schools in the spring by the Georgia High School Association the Indians find themselves back in Single A. A class in which Chattooga has not competed in since Paul Quinn was at the helm back in 1961.

Chattooga also finds themselves not only on the regular season schedule of the crosstown rival Bulldogs from Trion for the first time since 1971 they are in the same region. The new Class A Division 1 Region 7 includes : Armuchee Indians, Chattooga Indians, Coosa Eagles, Dade County Wolverines, Darlington Tigers, Pepperell Dragons,  and the aforementioned Trion Bulldogs. 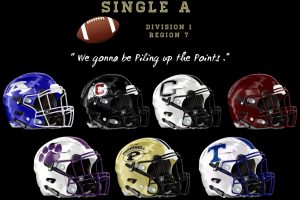 Previewing the Chattooga Offense for 2022:

The Indians welcome new offensive coordinator Paul Ellis who spent 14 years as the head coach in Fort Payne Al. He recently moved into the Georgia coaching tree and Spent 2018, 2019, 2020 as the head coach of the Lafayette Ramblers. He will coach up a Chattooga Offense that is basically all new.  Chattooga will feature the spread offense and will have 6ft 6 inch 200 lb Brady Groce at the QB position. Brady is a Multi-sport Athlete with a big arm ready to lead the Indians in 2022. Brady will have a few new names at the receiver position that are very capable of making plays on the outside. Quarry Gibson and Trey Smith look to take the top off the defense and allow senior running back Zaden Perry to have a big year on the ground. Don’t be surprised if full back Billy Settlemoir drags a few people over the goal line for a few touchdowns himself.

The Indian offensive line will be one of the focal points to watch this season as they are breaking in a few new faces.  I spoke to head coach Shawn Peek specifically about about his offensive line. He told me that they have decided on the five best linemen and they feel good about them. They are continuing to work each and every day to improve.

Previewing the Chattooga Defense for 2022:

The Indian defense will be anchored by returning starters such as defensive linemen Billy Settlemoir and linebackers Bubba Bass and Zaden Perry. Indians however will replace every player in the secondary heading into 2022. The Indians will look for help on a Defense from a few newcomers in defensive lineman Terrance Hunt and defensive backs Quarry Gibson, Trey Smith and freshman sensation Colton Sanford.

Previewing the Chattooga Schedule for 2022: 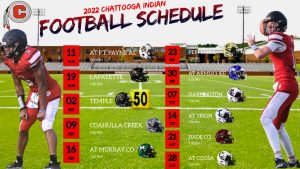 I am picking the Indians to extend the playoff streak to 9 years in a row while finishing in the #4 spot in Division 1 Region 7. Followed by #3 Pepperell,#2 Trion , and #1 Darlington. I think Dade Co and Chattooga are the 2 teams that will compete for that #4 spot. But I would not be surprised if either team finished as high as #3.

Overall the Indians have a lot of new faces in a lot of new places. The ability is there it will come down to can they gel on offense in time for region play ? Will the Defense materialize into one of the best in the region ? Will the new playmakers on offense play up to their potential. That’s the Beauty of it. We are all about to see it unfold right before our eyes. Football is here and the Indians are ready to strap it up.