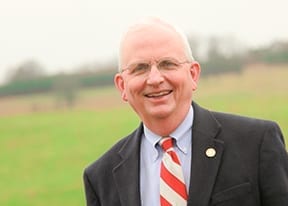 “They (President Joe Biden and Warnock) said they want to fundamentally change America. I fundamentally object to that,” Black stated before listing the rising gas prices, Middle East conflict, and small business crisis erupting in the United States.

Black believes he can provide the leadership that Georgians need in the U.S. Senate and that people choose to vote for him, not against someone else.

He also believes the GOP is healthy in Georgia with approximately 60 percent new attendees turning out for the state’s Republican Convention over the weekend.

“We’ve had the need for a cycle or two to get back to ownership of campaigns at the local level. Ownership of our values and a willingness to share them wherever we go particularly during campaign season. To put forth a positive message and a positive vision for the future of the state and the country,” Black commented.

The Agriculture Commissioner has worked closely with the Trump administration on Georgia’s farming issues. He would love to have the former President’s endorsement, but more importantly, Trump’s economic message doesn’t change. Black wants to keep Trump’s policies in place.

Black’s the first candidate to enter the U.S. Senate race with a statewide base in place. He’s served as the Agriculture Commissioner since 2011 and many across the state have already reached out to show their support for his candidacy.

Two Republicans Kelvin King and Latham Staddler entered the Senate race earlier in the year. Many wait to see if UGA great Herschel Walker will enter the race after Trump urged him to earlier in the year. However, Walker hasn’t taken any steps toward declaring his candidacy. Former U.S. Senator Kelly Loeffler, who lost to Warnock in January, did recently meet with Trump and could be contemplating another run.

Former Senator David Perdue and Former Congressman Doug Collins have opted not to run for the Senate in 2022.